Most people reading or watching the media during the last few days would have been left with the impression that Jeremy Corbyn had launched a major attack on the last Labour Government. In fact, he made a forward-looking speech to teachers on moving away from an emphasis on social mobility to talking about wider social justice instead. 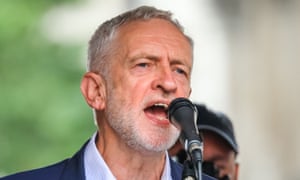 It got little coverage, no surprise there, until it was attacked by Tony Blair with a video and a fanfare, after which Corbyn was widely denounced for disparaging the last Labour government. Much of the vitriol was not in response to what he actually said, or even his own tweets on the issue, but to a strange and incoherent tweet from Momentum in reply to Blair’s video, saying in effect that austerity was Blair’s legacy. A little bit of displacement was all that was needed to make the charge that Corbyn had had a go at the last Labour government.

Blair’s video is a hallmarked example of the spin at which he is so adept (a political talent Corbyn lacks). He takes one line from the social mobility speech – “for decades we have been told that inequality does not matter” – adds in a couple of quotes carefully selected from other speeches in the past, then claims Corbyn is constantly attacking the last Labour government and ‘enough is enough’, before laying out some of Labour’s relatively good record on taking people out of poverty, spending on public services (focusing on health and education), throwing in Labour’s excellent performance on overseas aid as well. So far as I know, none of these are disputed by Corbyn, indeed I frequently hear him attack the Tory record by quoting Labour’s achievements in these areas.

But the facts of Labour’s record was not what this was about. The media skirmish that ensued was remarkable for the lack of nuance. An exception was Sean Fitzsimons‏ who tweeted “My take on the Blair/Brown Government. Solid performer on most fronts. Excellent on NHS, education, and improving incomes of pensioners and middle/low pay with children. Poor on house building, class and wealth inequalities, and North/South divide. 7.5/10.”

For virtually everyone else it was either 0/10 or 10/10. Hatred of Blair on the one hand and hatred of Corbyn on the other. The result of this madness will be no Labour government at the next election.

So, what about the substance of what Corbyn said? He was talking about inequality not just tackling poverty and he was talking about the weaknesses of the social mobility idea. Blair counters by saying inequality diminished under Labour. He compares the bottom decile with the top decile, but it is the top 1% that has become detached from the rest of society and that is what Corbyn concentrates on. Then again, this was not mentioned in his speech. Whether inequality rose or fell largely depends on which figures you pick, and it depends whether you include wealth as well as income. Blair also stresses that social mobility improved under Labour, rather missing Corbyn’s central point.

Whether it is fair to include 1997-2010 in the ‘30 years in which we were told inequality doesn’t matter’ or ‘dropping 40 years of political consensus’ is of course a matter of judgement, but in my view it is fair because it has proved possible to reduce poverty (normally measured by comparing the poorest with the average) without reducing inequality. Andy Burnham on Marr yesterday used a similar rhetorical flourish, saying  that governments have ‘failed the north for many decades’ including when he was in government. Is he to be denounced? Another expert in rhetorical flourishes, Peter Mandelson, probably did the most damage to Labour’s reputation in this area with his notorious comment that he was “intensely relaxed about people getting filthy rich as long as they pay their taxes”.

The idea of social mobility relies too much on counting how many people born into poor circumstances ‘make it’ into the richest group or into political power. Media often reduce it to whether someone born into poverty could become prime minister or find a ‘route out’ though football or boxing – the topic of many a film. It is often associated with the idea of ‘meritocracy’ and has been used to justify a wide range of both progressive and reactionary policies – including grammar schools and paid-for places in private schools, both of which are said to improve ‘social mobility’.

Corbyn was building intelligently on a substantial debate about social mobility in recent months, including important reports by IPPR and by CLASS think tanks.  There has also been debate in and around the current Social Mobility Commission, which has  commented on issues to do with inequality, warning that without major reform social and economic divisions within Britain’s society are set to widen. One of the current Commissioners,  Sam Friedman‏ @SamFriedmanSoc tweeted that “I would personally welcome a shift of political narrative away from upward mobility for some and toward a greater emphasis on inequality, individual flourishing, and tackling the reproduction of privilege.”

I suppose I’m a good example of social mobility, brought up on a council estate in a one-illness-away-from-poverty family and ending up with degrees and well-paying jobs. But nearly all of the young people I grew up with left school at 16 and did not have the luck that came my way. In my view, the social mobility approach focuses on people like me and ‘the ladder out’, changing nothing structural, whereas the social justice approach cares about all the rest and how to create a rising tide that lifts all boats.

Corbyn plans to replace the social mobility commission with a social justice commission, sponsored by the Treasury, which would have a wider brief to undertake audits and impact assessments of policy and suggest changes to legislation.

The quote that caused the uproar was taken from this part of Corbyn’s speech:

“For decades we’ve been told that inequality doesn’t matter because the education system will allow talented and hard-working people to succeed whatever their background. But the greater inequality has become, the more entrenched it has become.”

“The idea that only a few talented or lucky people deserve to escape the disadvantage they were born into, leaving in place a social hierarchy in which millions are consigned to the scrap heap, results in the talents of millions of children being squandered.”

I think this is uncontroversial, not worthy of the fuss that’s been made, yet grounded in reality, and the right way to go.

And the legacy of past Labour governments was fairly judged by shadow education secretary Angela Rayner, speaking with Corbyn, who said

“The Tories like to talk about people like me who had a difficult start but got on in life as evidence that anyone can succeed on their own. But actually my life shows the exact opposite. Any success I have had is thanks to Labour governments that provided the council house, minimum wage, tax credits and Sure Start children’s centre that enabled me to achieve it. That is social justice.”

Rayner also published an article making the case for the change in New Statesman.

So, despite the fury and the apparent division, this shift in emphasis away from social mobility towards social justice is actually something the whole Labour Party should be capable of uniting around.

There are many battlegrounds within the party, but this shouldn’t be one of them.

One reply on “From social mobility to social justice: How a simple policy announcement started a small war”

If Labour is removing nepotism and other up-n-out ladders such as grammar schools for the rest of us then we have no option but to raise all boats.

And by far the best, proven economic policy for raising most boats is capitalism. As endorsed by the China Communist Party.

With government help for those who need it.